Samurai Blue is the name of the Japanese national soccer squad. JFA says they don’t know why the soccer shirt is blue although the Japan’s flag colour is white and red.

They started to wear a blue shirt in 1992. Before that, they wore all white in 1964 (Tokyo Olympic) and white and red in 1998. They also wore a light blue shirt before and after the world war 2. 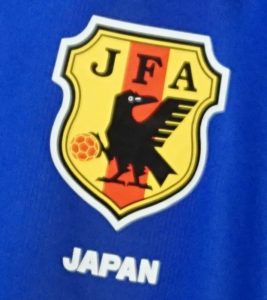 Crow in the Japanese myth

The bird you can see in the emblem is a special crow which appears in the Japanese myth. It is called ‘Yatagarasu（やたがらす or 八咫烏）’ and it has three legs.

It is believed that Yatagarasu guided the emperor to the right destination when he got lost in the forest. Yatagarasu on the Japanese soccer shirt could mean that it leads the players to victory in a match.

You can see Yatagarasu holding a red soccer ball in the emblem. The red ball indicates Japan as the red circle in the middle of the Japanese flag.

This means that Yatagarasu fully supports the Japanese national soccer team with its leg.